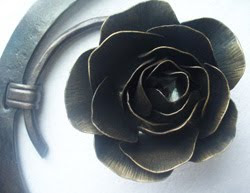 i was thinking the other day that writing to me is like smithing.

it's not even that i feel like i'm somehow working magic* with words, even though it sometimes seems like that.

no, i discovered the other day that my writing is like blacksmithing because i like to "strike while the iron is hot"... or to put it another way, i like to work on story ideas as they come to me.

i can have one story going and come to an impasse, and then the idea for another story emerges. i'm learning that the creative part of my mind needs to play (especially when i'm in 2nd or 3rd draft mode), so i'm starting to allow my brain to play and work on a story that has my attention. oddly enough, when i let my mind play, the writer's block for the 2nd draft usually clears.

(i've also discovered that when i let myself play with words instead of fighting it, i'm a much happier writer.)

* i don't remember where i read it, but when i was doing research for Eldala, i learned that people used to think that blacksmiths had magical powers because of the way they made the metal bend to their will. do you ever feel like you're working magic over words?
Labels: random things about me
Email ThisBlogThis!Share to TwitterShare to FacebookShare to Pinterest

I feel that writing is magical, you are creating really your own seperate universe, and isn't that something quite amazing! I think blacksmiths posess magic as well, the work is amazing and they make it seem quite effortless!

I really appreciate this post. I find that when I'm feeling stuck with a piece (which happens OFTEN lately), I come up with these other ideas but I feel like I "shouldn't" play with them until I've gotten over my hump. So I make notes on papers which often end up strewn about the house, to be dealt with later.

Your post has been a great reminder that sometimes it's okay to switch your focus to another story before heading back to the one you were previously working on.

Jen, it sure feels effortless when i read it, but then i remember how much work i put in...

Erin, glad i can encourage your brain to play.

I agree that striking while the iron is hot is the best way to craft a story. Unfortunately, I don't have the freedom to do that. I feel like I'm trying to bend cold metal at this point. It's not working.

I should clarify that, my brain feels like cold metal! I'm so busy and pulled in so many directions right now that I don't even want to write, which is sad. When I do, there's no inspiration. It just feels like work.

I really don't know how people can be creative and still be effective in everything else in life. And I can't think of something to NOT do. Like, I can't stop working, nor stop taking care of the house, nor stop doing Scouts. So, you know, only the dregs are left by the end of the day.

Christine,
i hope that with your laptop you'll be able to carve out a little more writing time since you won't have to fight for the computer. big hug.

i'm Michelle Gregory. i love my husband, my 3 kids, my 1 cat, 2 dogs, and 2 horses. i'm a native Arizona girl, but i'm learning to appreciate life in Montana.